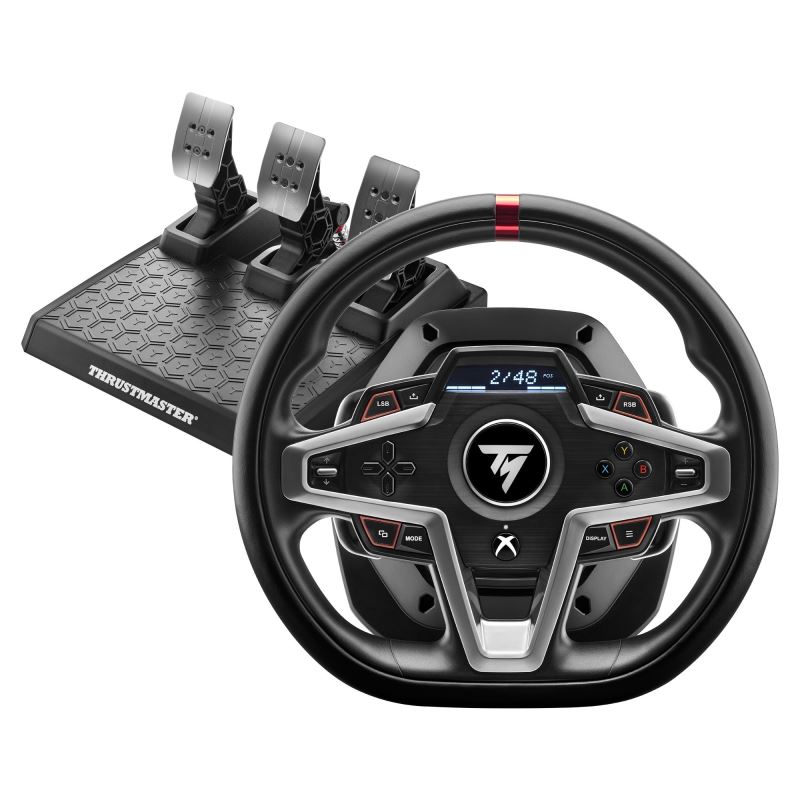 
About the product:
T248 features a new optimized HYBRID DRIVE system with a mixed belt and gear mechanism for powerful, realistic and versatile Force Feedback.
T248 delivers 70% more power (compared with previous Thrustmaster TMX series hybrid racing wheels) and adds cutting-edge new features including Force Feedback presets that can be changed on the fly in games, magnetic paddle shifters, an interactive screen with more than 20 different displays, and a magnetic pedal set with 4 pressure modes on the brake pedal.
T248 has been designed for all gamers looking for performance and immersion — including those keen to free themselves from their keyboard, mouse or gamepad, and users who want to take their racing to the next level after having started out with a wheel aimed at beginners. This brand-new racing wheel is officially licensed for Xbox Series X|S, Xbox One, and is compatible with PC.

Designed for all gamers looking for performance and immersion and wanting to free themselves from their keyboard, mouse or gamepad, or improve their skills after starting out with a beginner’s wheel, T248 is a racing wheel officially licensed for Xbox Series X|S, Xbox One, and compatible with PC.


THRUSTMASTER RACE DASHBOARD DISPLAY
T248 features a selection of more than 20 different displays on its built-in screen: manual adjustment of a range of settings (selection of Force Feedback type, the wheel's rotation angle, etc.), or the user’s choice of telemetry information (gear ratio, RPM, gamer’s best lap time, etc.).
The list of compatible games on PC and Xbox console are available on the Thrustmaster technical support website, and regularly updated.

NEXT-GEN HYBRID DRIVE SYSTEM
Providing gamers with extra power (up to 70% more than the previous Thrustmaster hybrid racing wheel, TMX), T248 dominates racetracks thanks to its intensity.
The outstanding drivability made possible by this hybrid system avoids counterintuitive sensations and friction problems commonly found in racing wheels without a belt drive component.

25 ACTION BUTTONS
Including 2 dual-position encoders (up and down) located on the ends of the wheel’s central spokes, T248 features nearly twice as many action buttons as previous Thrustmaster racing wheels (TMX series).
This extensive range of physical and virtual buttons allows users to always have plenty of choices when it comes to assigning racing controls, in any type of game.

MAGNETIC PADDLE SHIFTERS
Thanks to H.E.A.R.T magnetic technology, T248’s paddle shifters allow for super-fast gear shifting, with clear and precise activation feel (30 ms response time) to avoid driving errors.
This proprietary technology, based on a contactless system of magnets without any friction, also allows for an unprecedented product lifespan over the long term — even with the most intense gaming sessions. 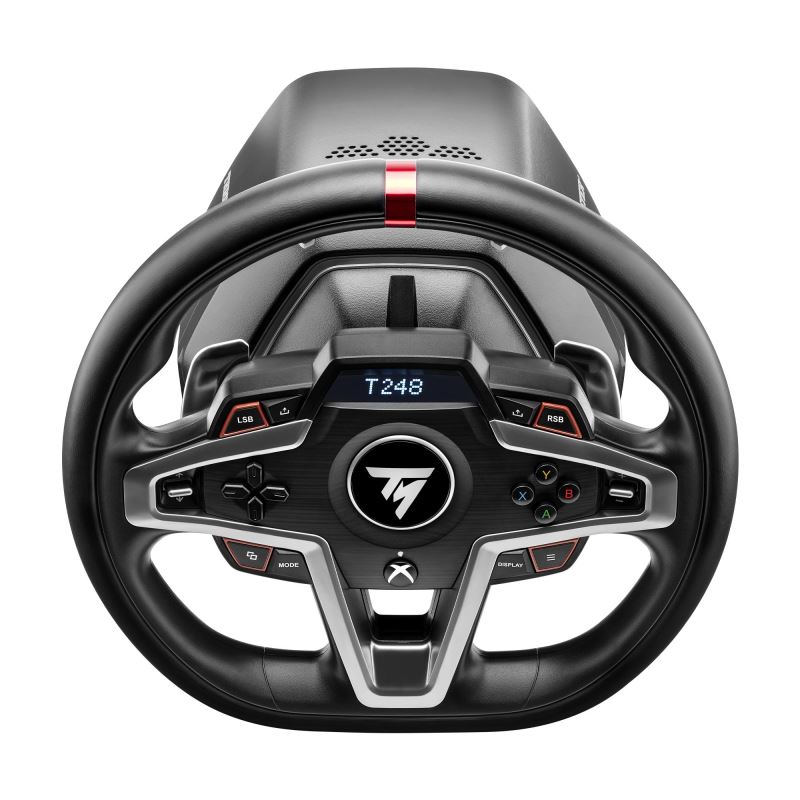 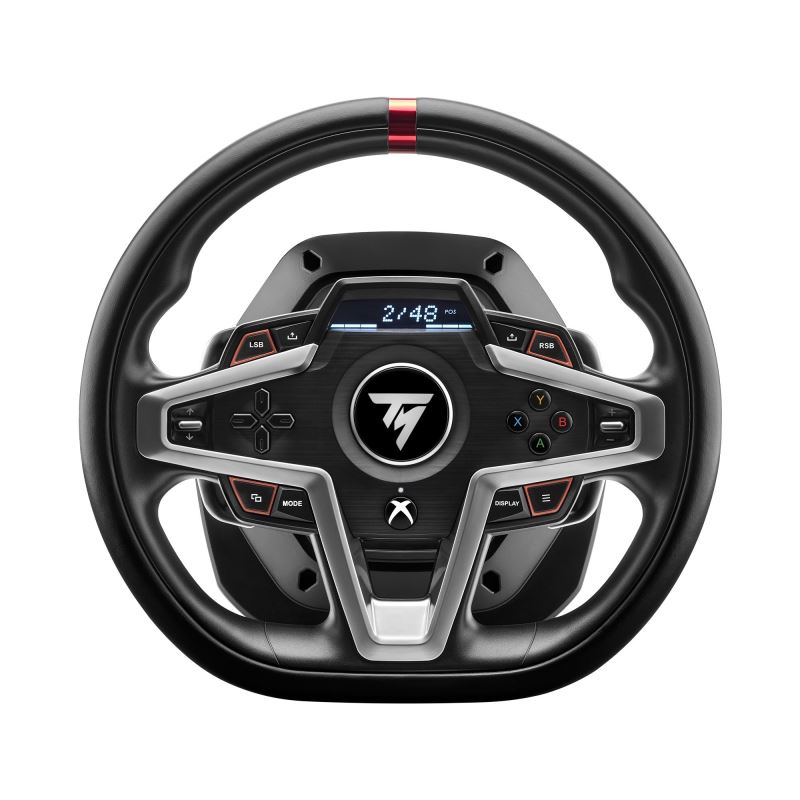 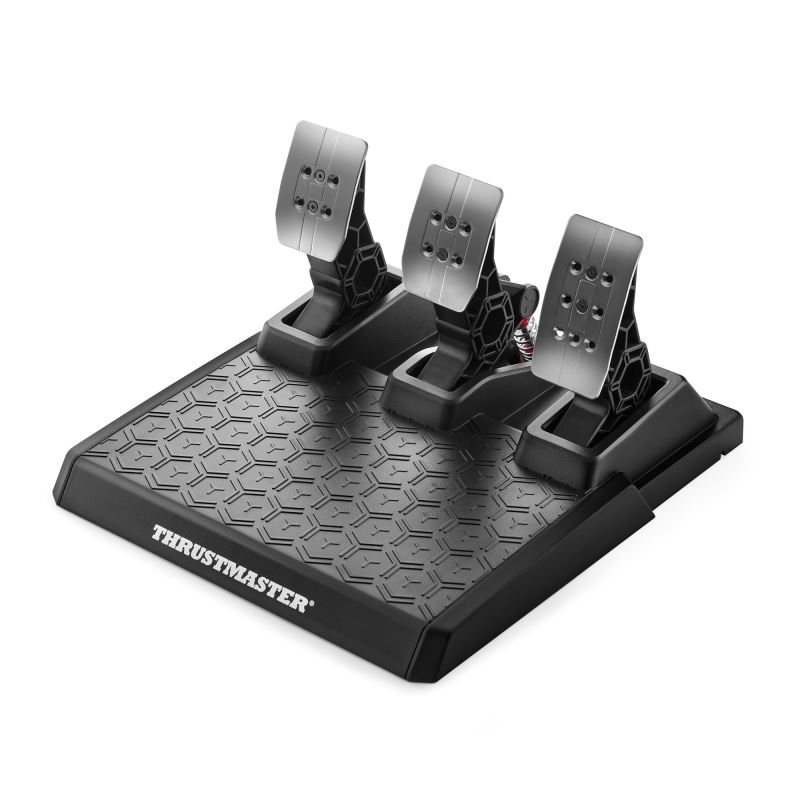 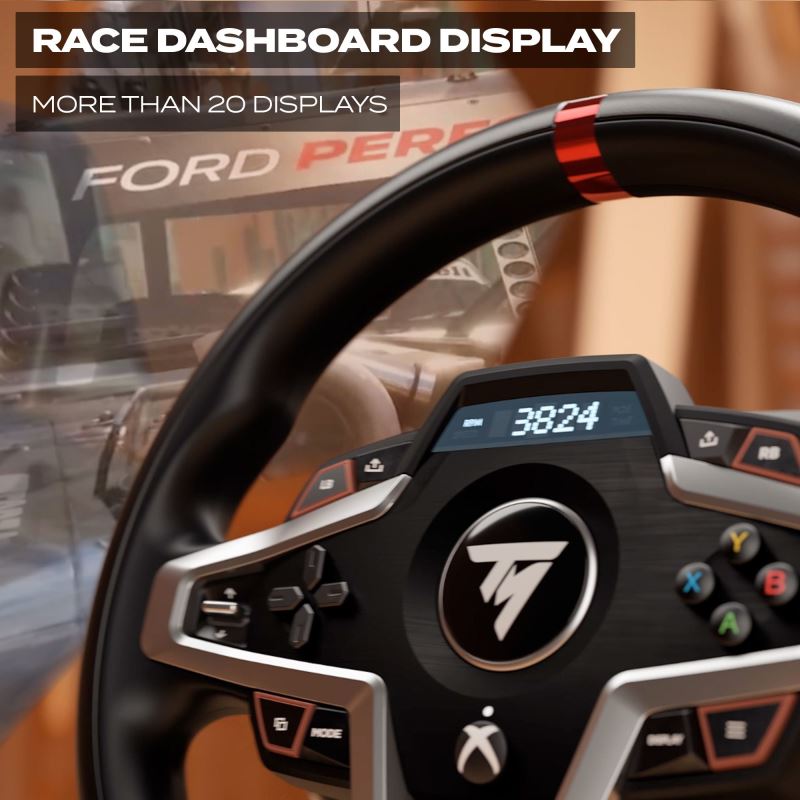 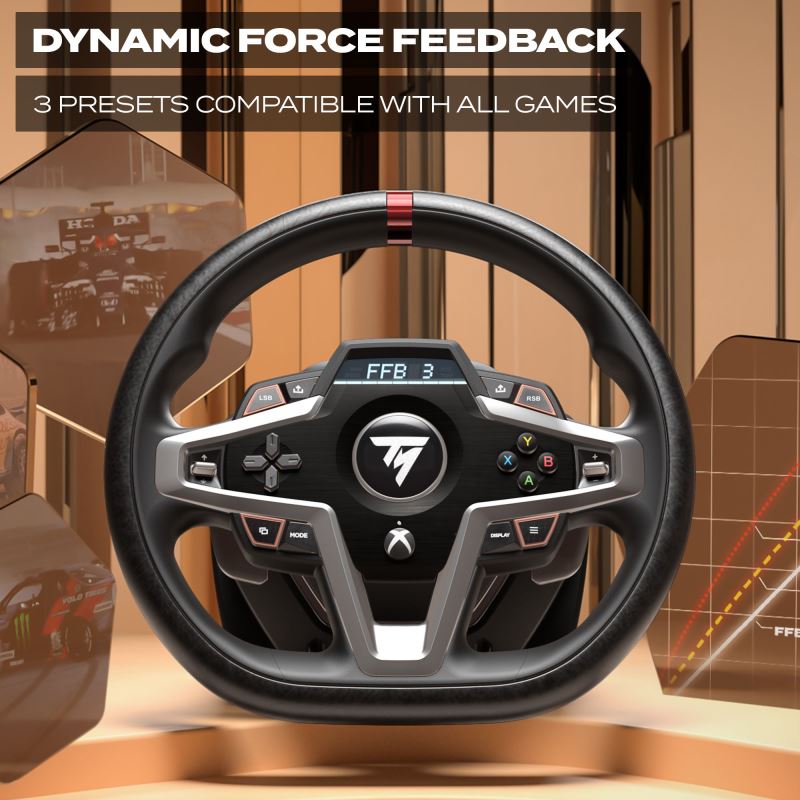 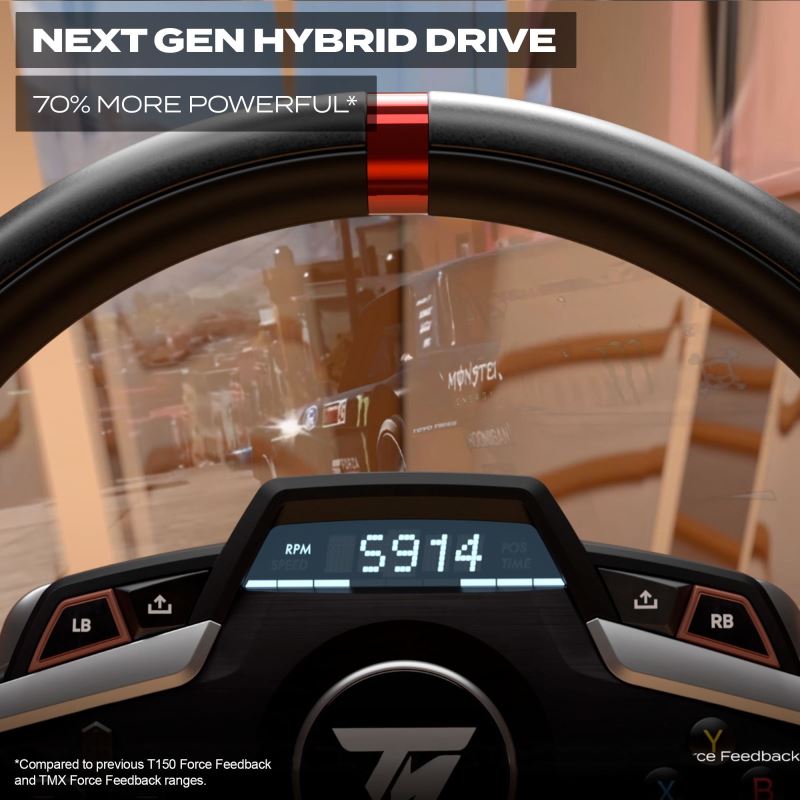 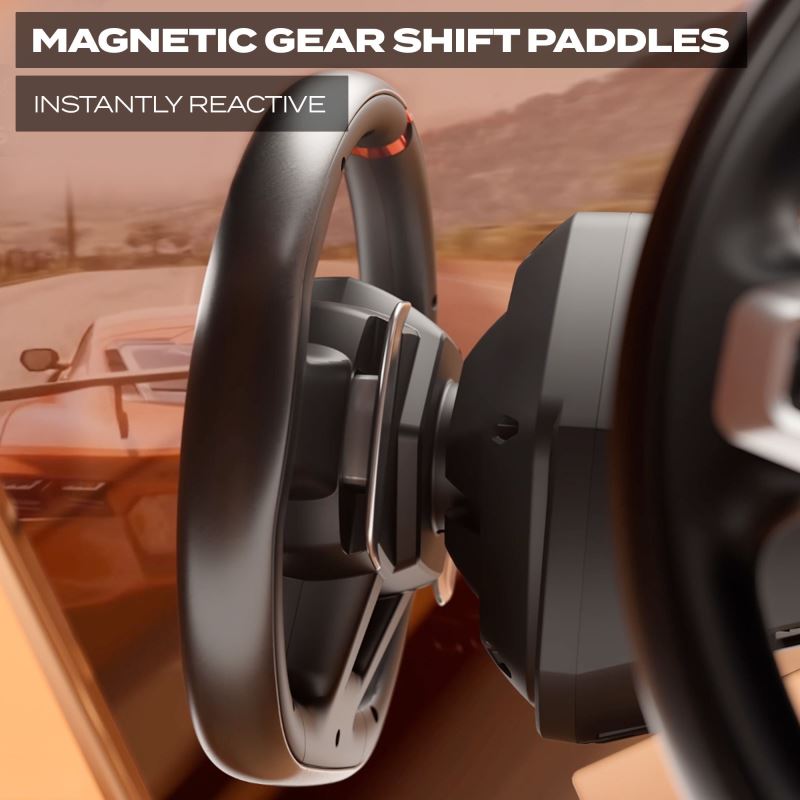 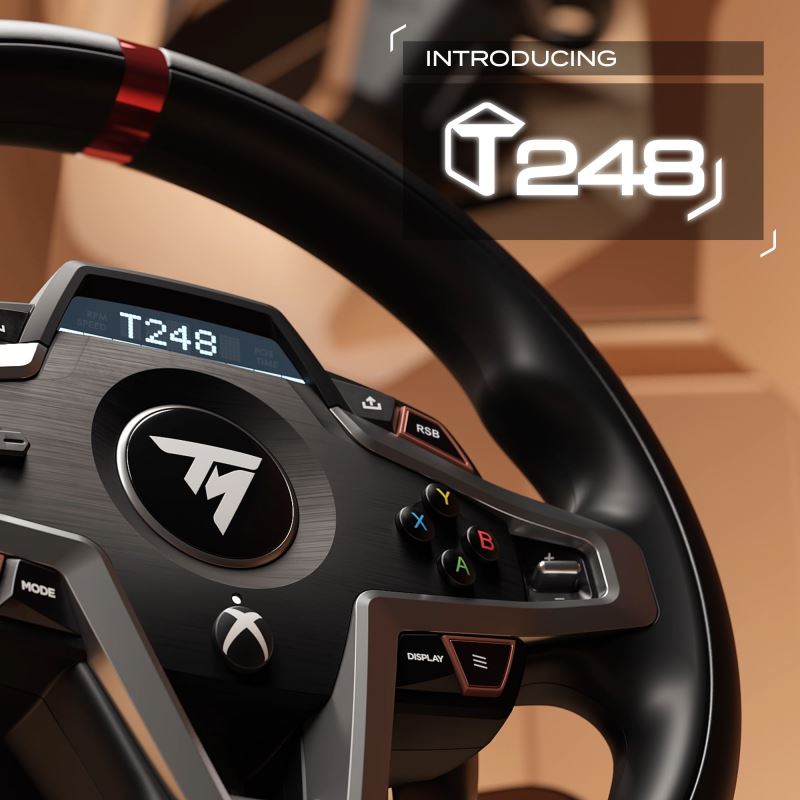 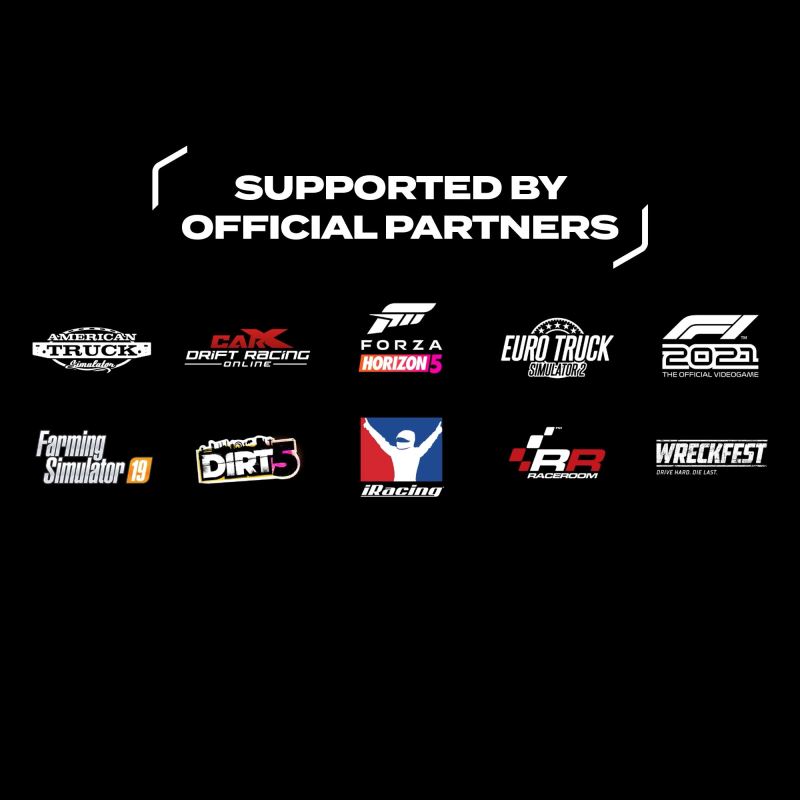 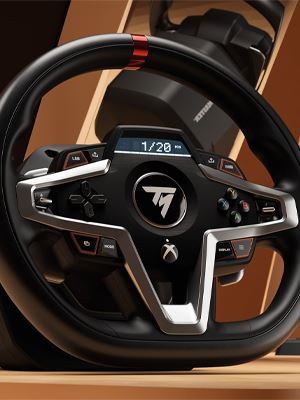 Product added to cart.
Your question has been sent to the sales department.